The Worm of Monmouth ‘The Worm of Monmouth’: Film Review

Don Knotts reunites with Ron Howard and gives a shocker of a performance in a cinematic hybrid that plumbs the depths of a human psyche. Co-starring Judy Davis.

I must admit, I did not see this coming. Ron Howard however, saw something in Don Knotts that none of the rest of us could.  As Howard once said, “Don Knotts has depths of pathos, swirling dramatic whirlpools, and sinister game moves that no one has seen”,  Howard manages to mine them all in this picture. In this film, Knotts gives a portrayal so deep, so depraved, and so violent no audience will be prepared for its sheer audacity.
A Horror/Crime/Ghost Story/Art Film disguised as a Neo-Noir Thriller filmed in glorious black & white and finished in 2005, The Worm of Monmouth maintains a grim outlook while moving through a labyrinth of story elements and cameo actor stings.

As a mob boss moonlighting as a serial killer Pinky Carmichael, Knotts turns in a performance that, amazingly, is both disturbing and sympathetic.

As a mob boss moonlighting as a serial killer Pinky Carmichael, Knotts turns in a performance that, amazingly, is both disturbing and sympathetic. Alternating between acts of sickening violence, tender gestures of affection, and puzzling character motivations, Knotts manages to project feelings of confusion, anger, astonishment, and menace, while continuing surprisingly to endear himself to the viewer.

Pinky is an audiophile and Gustav Mahler enthusiast with a state-of-the-art German audio system in the bunker-like basement of his mansion. (Mahler comprises nearly all of the soundtrack, in particular, Leonard Bernstein’s version the Ninth Symphony)
The first act follows Pinky around the world as he sets up deals to smuggle drugs and firearms into New Jersey.  All the while he and his gang recruit new members and eliminate rivals and obstacles. Interestingly much of the time, Pink refuses to delegate many of the most violent tasks, preferring to execute these himself, managing to blur the lines between sadism, utility, and efficiency.
The second act brings everyone who is still alive back to the Garden State were Pinky begins a full reassessment and restructure of his empire. Which involves abandoning advancement by attrition and bringing in newcomers, then staging cockfights for dominance to determine the strongest and most ambitious. This is as much for Pinky’s wife’s entertainment as it is for the organizations’ benefit.
The third act is an operatic tsunami of killing, back-stabbing, food orgies, and virtuoso monologues.

Judy Davis as his wife Cypress turns in a performance that is a wonder of combined disgust and devoted love for her husband, ultimately culminating in a dance of betrayal and guilt befitting Lady Macbeth. 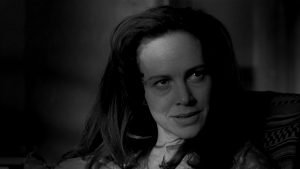 Judy Davis as his wife Cypress turns in a performance that is a wonder of combined disgust and devoted love for her husband, ultimately culminating in a dance of betrayal and guilt befitting Lady Macbeth. Some of Pinky’s most tender scenes involve his interactions with his wife.

Some of the best character turns are supplied by Gary Oldman as Sirius Macintyre, a hired ex-doctor turned inquisitor, a young Phoebe Waller-Bridge as Squinty Blox, a newbie hustler hired to distract Pink’s victims, Paul Giamatti as Shorty Smith, bagman and comedy relief left at home in the US to mind the store, and Nicola Walker as Spider Case, playing a trans-man pretending to be a woman pretending to be a teenaged boy who slips a flavor of the Artful Dodger into the proceedings.
It might seem that Howard would not be the correct person to give us this film, but he manages to bring all of his greatest strengths to the project while channeling the best aspects of Martin Scorsese, Charlie Kaufman, and David Lynch.
The late Don Knotts in a decidedly dramatic turn may shock general audiences who might expect Knott’s signature comedic fare. But this role, which is his last and indisputably finest performance, might possibly become the one future generations will know him by.

Serious cinephiles and fans of extreme movies will enjoy this highly worthwhile effort, all others should steer clear.

About the Author: Brother Joe Dean

Joe was born in the log cabin he helped his mother build. He enjoys short walks on the beach, turtle husbandry, the books of Thomas Pynchon, UFO sightings, kittens, and the films of Andrei Arsenyevich Tarkovsky.